Lincoln Art Center > Exhibits > Have I Been There Before : Jerry Exline Retrospective and Vaughn Graber, Woodturning

Have I Been There Before : Jerry Exline Retrospective and Vaughn Graber, Woodturning 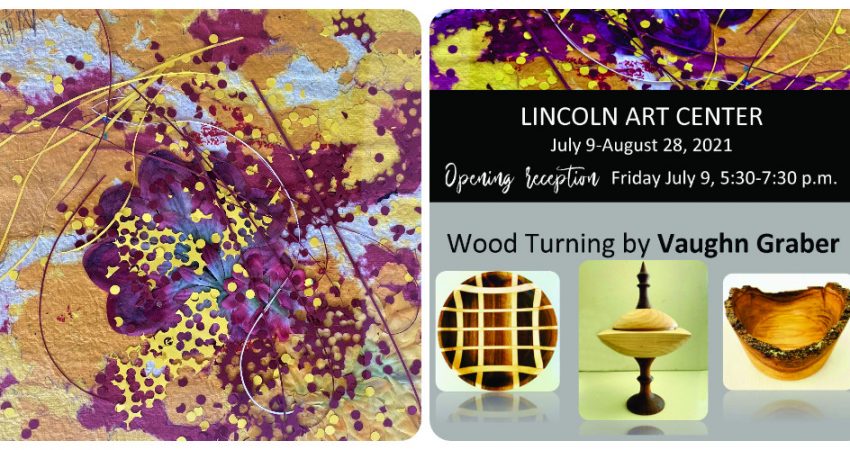 Upon earning a Bachelor of Architecture from K-State in 1960, JERRY EXLINE attended Naval Officer’s School and was commissioned as Ensign in the USN Civil Engineering Corp in 1961. He served as a construction contract administrator in San Diego. Following the Navy, he was employed by Frank L Hope Architectural Inc in San Diego for several years.

He then pursued a Masters in Architecture at KSU accompanied by a graduate assistantship in the Art Department from 1964-1967. He was employed by the Wolfenbarger Architectural firm in Manhattan until joining his family business in 1968, handling the company expansion and running its industrial chrome plating plant for 27 years. During those years he continued to explore multiple art mediums and worked with many accomplished artisans.

After retiring, he once again was free to explore the arts. His most recent passion involved exploring the many avenues offered in the use of paper pulp. His work has been exhibited in many local galleries including Bergen’s Sculpture Gallery, Kansas Wesleyan University, Salina Country Club, VAAM Gallery in McPherson, Hays Art Center, and the Kemper Gallery at K-State. He published a book, P Cast Colored Paper Pulp: A Step by Step Guide with John Neal Books.

After retiring, VAUGHN GRABER decided he could not play golf, hunt or fish every day.  His excuse for purchasing his wood working tools was they would keep him out of the bars and off the streets. He is a member of the Kansas Woodturners, Flint Hills Woodturners, AAW and the Topeka Sawdusters. He also has a booth at the Woodcarvers Show in Topeka which is usually held in November.  He also shows at Creations of Hope, Leaping Llamas, South Wind and the Kansas Historical Society. His pursuit of top notch wood products has led to astounding pieces of wood art in the solid and segmented bowls that he turns on his lathe.

This exhibit was featured at Lincoln Art Center May 14-June 30, 2021 featuring Angela Muller and Barbara Stevens.

Parallels is a multi-media installation by Artists Ann Zerger and Chip Parker which celebrates the preservation of the native Kansas grasslands by bringing an outside Eco Sphere, in. In addition to the gallery exhibit, they will work with local students to create an ephemeral art work from natural prairie materials which will also be on display.